A useful description of Chacarera from tangowords.com via a Facebook post by Manuel Garber‎ and shared by Hilda Yuan: 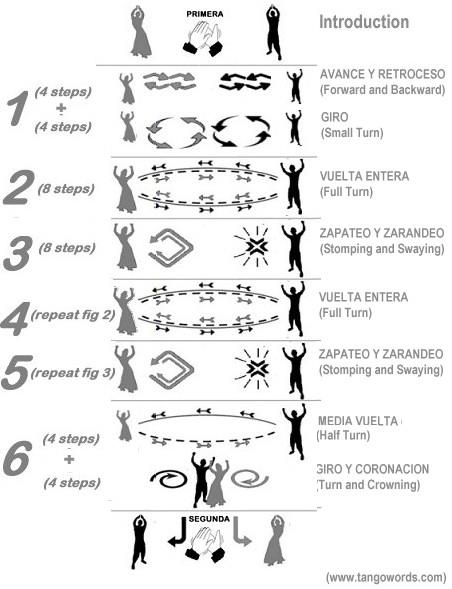 INTRO SECTION:
Eight beats in which the dancers are clapping. as one of the musicians calls out “PRIMERA!” or “SE VA LA PRIMERA!” meaning “It’s the first!”, or “lets go with the first part”. Once the musical introduction ends, a call of “ADENTRO!” is made, which simply means “IN!” or “lets get in”, Which initiates the dancing.

FIGURE-2:
– VUELTA ENTERA (Full Turn) – 8 bars – Four steps forward to the opposite side, and again 4 steps to the original position, always facing each other and leaving the center free.

FIGURE-3:
– ZAPATEO Y ZARANDEO (Stomping and Swaying) – 8 bars – In this figure, the couple performs a different choreography. The male stomp, while the woman sways holding her skirt with both hands so it looks like a reversed fan, doing 2 diamond shaped figures of 4 beats each.

FIGURE-6
– MEDIA VUELTA (Half Turn) – 4 bars – Four steps forward to the opposite side.
– GIRO Y CORONACION (Turn and Crowning) – 4 bars – Two steps towards the center, a quick turn on the spot and the man “crowns” the woman symbolically by closing his arms above her head.

Just before FIGURE-6, a call of “AHORA!” is made (it sounds like “AURA!”) which means “NOW!” and its a reminder that this is the last figure and now is the time to crown your girl.

After this “PRIMERA” section, the whole set of 6 figures is repeated a second time with a call of “SEGUNDA” or “SE VA LA SEGUNDA” (meaning “lets go with the second part”), keeping in mind that the dancers switched sides.

After the second set a musician will call out “SE ACABA” which means “its ending”, to indicate that 2 sets of figures is enough!. (the whole thing took only 3 minutes)