This week’s Tango Mahi “Tanda of the Week” is of vocal tangos of Orquesta Francini-Pontier. 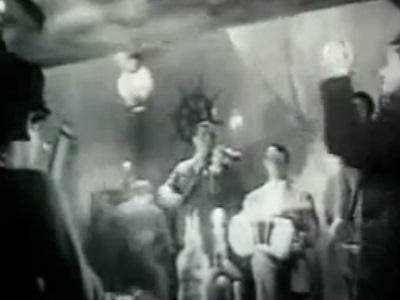 In 1936 a tango music teacher and band leader from Zarate, north of Buenos Aires, organised for a group comprising some of his best local students to play a one-off performance in Buenos Aires. The group included violinist Enrique Francini (age 20), bandoneonist Armando Pontier (age 19), and pianist Héctor Stamponi (also aged 19).

The performance was well received and led to the three being offered work by established musicians, at popular Buenos Aires events and venues, and on Radio Argentina, culminating in their 1938 recruitment by bandoneonist Miguel Caló (then 31 years old) as core members of a new orquesta he was setting up.

The Caló orquesta enjoyed huge popularity and success, with regular live radio and milonga performances in which they played covers of dance music recorded by other orquestas as well as original music composed and arranged by Francini, Pontier, Stamponi, Federico, Maderna and to a lesser extent, Caló.

Through 1944 and 1945 most of the key Caló orquesta members left to join other orquestas or to form new ones. Alberto Podesta and Raúl Berón chose to become the initial vocalists of the new Orquesta Francini-Pontier, which was immediately hired by Radio El Mundo and signed by the Victor recording company.

In 1955 Francini and Pontier reached an amicable agreement to dissolve their orquesta and go their separate ways after which both enjoyed great ongoing success; Pontier with his own new orquesta, and Francini in a variety of groups including Astor Piazzolla’s Octet and the 1960 Quintetto Real with Horacio Salgan, Ubaldo de Lioboth and Pedro Laurenz.

For the Tanda of the Week, I have chosen three Francini-Pontier songs from different points through the life of the orquesta, featuring three different singers: