Milongueros tend to either love dancing to Biagi music or to avoid dancing to it, for all sorts of reasons. 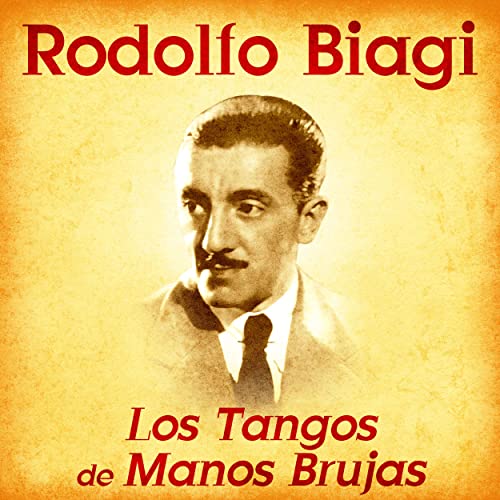 Dancers who love it include those attracted to its strong and steady underlying staccato rhythms, the melodic repertoire, the beautiful piano fills played between musical sections and phrases, and the challenges of timing steps and adornments to match the numerous pauses and syncopated accents (that the dancers may have studied and memorised).

Dancers who avoid dancing to Biagi include those who are intimidated by the syncopations, and those who love the syncopations but either haven’t yet memorised enough of them to be confident, or have memorised them but can’t find a dance partner they are confident will have a similar understanding and compatible dance inclinations when they occur.

Biagi was born in Buenos Aires in 1906, switched from violin to piano at the age of 15, and began playing in cinemas for silent movies. The quality of his playing was recognised by leading Buenos Aires musicians and the teenager was soon recruited to play in a number of leading tango orquestas with whom he went on to perform, record and tour through the 1920s and early 1930s. In 1930 he was also recruited to play piano for Carlos Gardel recordings, all of which had previously had only guitar backings.

During 1934-35 Biagi often substituted for Juan D’Arienzo’s piano player whenever he was late to gigs (which was often), and in 1935 got the role permanently. Biagi saw this as an opportunity to elevate the pianist’s role in tango from being primarily an accompanist in the rhythm section, to also becoming a featured instrumentalist and soloist.

D’Arienzo, with Biagi’s significant input as a music arranger and piano player, made major changes to the way the orquesta played its music. The changes included increasing the orquesta’s size, improving amplification, strengthening rhythms and rearranging existing tangos and arranging new compositions specifically for tango dancing. The D’Arienzo orquesta and recordings became so popular that D’Arienzo chose to operate multiple orquestas simultaneously, with he and his vocalists rotating between them each night.

As and when D’Arienzo was elsewhere fronting his other orquestas, Biagi would assume a leading role in the orquesta he played in, and chose frequently to enhance the written arrangements by varying his catchy piano fills between musical sections and phrases, and adding piano solos and piano syncopations. These innovations were very well received by the increasing numbers of milongueros who began to favour the orquesta in which Biagi played, over D’Arienzo’s seven other orquestas.

When D’Arienzo eventually worked out what was happening he confronted Biagi telling him that there could be only one star in his line-ups, and duly fired Biagi. Biagi proceeded to set up his own orquesta, which almost immediately became very popular in Buenos Aires for milongas, radio broadcasts and recordings. A regular program on Radio Belgrano, for which he was nick-named “Manos Brujas” (spellbinding hands) continued for 20 years. His orquesta was also featured regularly on the Glostora Tango Club program on Radio El Mundo and he and his orquesta won starring roles in one of the earliest Argentinian television programs.

I have chosen three very danceable instrumentals for the Tanda of the Week, all of which incorporate syncopations and fills typical of Biagi, but not to the extremes that exist in other instrumentals such as “Belgica”.

The first is of one of my favourite tango leaders, Chicho Fromboli dancing (presumably improvised steps) with Moira Castellano:

The second is a (presumably choreographed) dance by Jonathan Saavedra & Clarisa Aragon, who were booked to be one of the two featured couples at Cecile Bale’s Oceania Championships in 2020, before the event was cancelled because of the COVID-19 pandemic:

There are also video clips on YouTube that are well worth watching, of dancing to all three songs in the tanda including by Murat Erdemel & Sigrid Van Tilbeurgh dancing to El Enterriano, and comedians Laurel & Hardy dancing to Pura Class.

This week’s “Tanda of the Week” plays recordings by the contemporary Buenos Aires orquesta Bohemia...

This week’s Tango Mahi “Tanda of the Week” is of vocal tangos of Orquesta Francini-Pontier....